The latest EU Terrorism Situation and Trend Report came out today. Using this report and the previous six ones, I’ve made this chart of jihadism-related terror arrests in the EU during the past seven years.

The blue line at the top shows the total number of these arrests annually across the EU (except for the UK), while the other lines show arrests for key countries. 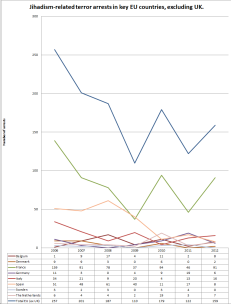 This chart excludes EU countries with few, if any, jihadism-related arrests. Therefore the “Total EU (ex UK)” figure at the bottom of the columns is often larger than the total of the eight countries listed. UK figures are not included in Europol reports because the UK doesn’t provide its terrorism statistics in a manner compatible with the rest of the EU.

It’s worth remembering that jihadism is only one part of the diverse terrorism threat facing Europe. The report released today found a total of 219 “failed, foiled and completed attacks” in the EU during 2012. There were 6 jihadist attacks, 18 far-left attacks, 2 far-right attacks, 167 separatist and 26 unspecified attacks.

You can find the last seven EU Terrorism Situation and Trend Reports here.